Ray has a Toshiba Equium M40X-189 notebook. In spite of being an old model, it had been doing the work it was supposed to do very well except for the lack of memory, which was only 512M (standard).
So last week I decided to upgrade the ram. The first step was to figure out which was the maximum memory expandability for the laptop. It was pretty easy to find out that it was 2,048 MB. We then bought two 1Gb IBM memories (1024MB DDR SODIMM 333MHz PC2700 200pin 2.5v).
You can see the upgrade procedure, step by step below:
1. Wrap an anti static strap around the wrist and connect it to the earth plug.
2. Remove all cables connected to the computer.
3. Turn the computer upside down and remove the battery. 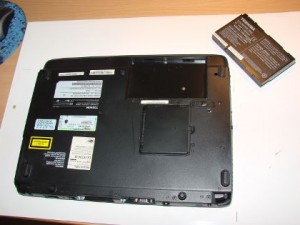 4. Loosen the safety screw securing the memory module socket cover.
5. Slide your fingernail or a thin object under the cover and lift it off.
6. Fit the module’s connectors into the computer’s connectors at about a 45 degree angle and press the module carefully to ensure a firm connection. 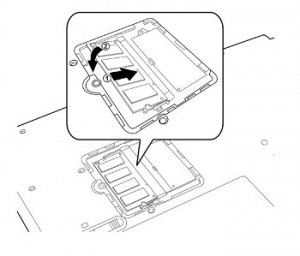 7. Push the module down so it lies flat. Latches on either side will click into place to secure the module. 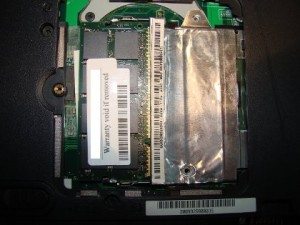 1Gb ram placed in the slot located underneath the laptop.

After this procedure we have a Toshiba Equium M40X-189 with 1.5Gb Ram and it’s pretty faster than before. But as I said, we bought two memories and I still have to remove the standard 512M memory and replace it with the 1Gb ram I have left. At this point the problem started.
When I opened the ram memory compartment to place the first 1Gb, there was only one single slot and the standard 512M memory was not even near that place. Because some TOSHIBA models have the other memory slot underneath the keyboard, I decided to remove it and have a good look. After doing this all I found was the wireless Lan unit and its antennas. To my disappointment, there was no sign of 512M under the keyboard. 🙁 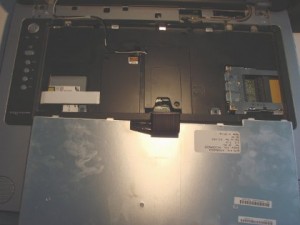 No sign of standard 512M memory underneath the keyboard.

This morning Ray made a phone call to Toshiba UK to confirm the ram expandability of the Toshiba Equium M40X-189, and the guy from the customer service confirmed the 2Gb. Then Ray asked where the heck the standard 512M memory was located, not with these words 🙂 , and explained that he had upgraded the laptop memory to 1.5Gb placing 1Gb in the slot underneath the laptop, but he couldn’t find the second slot with the standard memory. The guy from Toshiba informed that there is only one slot to allow the memory to be expanded and the 512M is a built in non removable memory. Then Ray insisted that in their web site it’s clear that the the maximum memory expandability for this laptop is 2Gb.
Now it comes the shocking part, the guy answered that it shows 2Gb because ‘you are supposed to place a 1.5Gb memory’ in the free slot underneath the notebook. Whaaa? 1.5Gb memory? Where is it sold ? I thought memories came in 128M, 256M, 512M, 1Gb, 2Gb modules. Holy cow! Where can I buy a 1.5Gb memory module?
Having said all this, we have a spare 1Gb IBM memory looking for its place in the world 😀 and I have two simple questions:
Is it possible to remove the standard memory from the Toshiba Equium M40X-189 and replace it?
Does any good soul know where the standard 512M module is located in the Toshiba Equium M40X-189 ?
I’d love to have an answer. 🙂

Update (16/10/08)
Finally we had an answer from TOSHIBA.
A member of Toshiba’s customer service team, who was exceedingly helpful, provided us with the following informations about Toshiba Equium M40X-189:

I didn’t have enough courage to split the laptop without at least having a diagram, so we decided to give back the spare 1Gb IBM memory module and ask to be refunded.
Our conclusion? What a stupid place to locate an upgradable memory!

Update (27/02/09)
Good news from a reader called KCM. He has changed the original ram in his Toshiba laptop and he advised us as follows:

It is no problem though to replace the original 512MB RAM. Just follow the instructions on the following web page, and it is almost as easy as updating the memory.. A non hardcore hardware guy like me can change it, so others will also be able.. :0)
http://www.irisvista.com/tech/laptops/ToshibaM35X/satM35X_1.htm

I personally don’t have the courage to split my partner’s laptop in two, but if you want to have a go this link is very useful.
Well done KCM! 😀