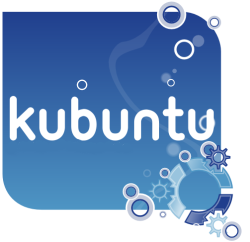 I’ve just installed Kubuntu on my laptop. I’ve wanted to install Linux on my computer for a long time but I was lazy and I was feeling comfortable doing the things Windows used to tell me to do in spite of feeling limited. Two weeks ago my thoughts started to change when I started some training courses here in Brazil. The first one was a database course (MySQL) and the second was one about PHP programming. The course instructor is a Linux/GNU enthusiastic and after a few classes listening to his speeches highlighting the advantages of using Linux I decided to try Kubuntu.
I was concerned because I already had Windows Vista previously installed on my system and I didn’t want to loose any data. Fortunately it didn’t stop me.
Firstly on Windows Vista, using the disk manager I shrank the OS partition in order to create enough continuous space to install Linux. After that I booted the laptop from the CD/DVD drive with Kubuntu installation CD. Everything worked fine but the microphone. My brain fried on Sunday trying to figure out a way to fix the problem and after changing some settings on alsamixer I got the microphone to work properly. I also had some problems with the NVidia card but it was sorted after some changes on the configuration. Now my lovely Dell XPS M1330 has a dual boot (Linux and Windows). I’ve already installed some open source softwares like Gimp, Audacity, Pidgin and Filezilla. I also installed Skype, Firefox and Thunderbird. All I have to say is: I’m happy as a newbie in shite. What a great weekend! 🙂

If programmers deserve to be rewarded for creating innovative programs, by the same token they deserve to be punished if they restrict the use of these programs. – Richard Stallman