Today I received an e-mail from Livestation Team saying that finally I could download the software as a beta tester. Livestation is an application that enables live TV on the desktop, it uses Microsoft Silverlight to playback broadcast streams received over P2P. Differently from Joost which displays pre recorded shows, Livestation brings live TV channels to the computer. The software has been developed through a partnership between Microsoft Research and Skinkers.
I installed the application and I was impressed. Because it’s in its early days, it is possible to see only a few channels like Al Jazeera, Bloomberg, BBC, France 24 and Sky News. The image didn’t look great when I went to full screen mode but I still think it’s ok. I turned on the TV and ran Livestation on the same channel (Euronews) and I noticed a slight delay, but it really doesn’t matter, it seems this new software is going to cause a revolution in the broadcasting world. 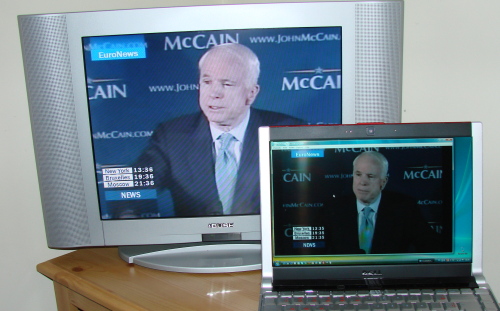 One thought on “I’m Trying Livestation – Broadcast Over Broadband”